Tillamook Branch of American Association of University Women (AAUW) hosted their 15th annual STEM recognition of high school senior girls on January 22nd at TBCC.  The high achieving students were nominated by their teachers in the areas of science, technology, engineering and math (STEM) and honored at a reception with their parents.  Co-chairs Jean Schultz and Kris Lachenmeier introduced the following senior girls:  Alana Contreras, Quinn Wagner and Jordan Zweifel from Tillamook High School; Samantha Noregaard and Roan Childress from Neah-Kah-Nie High School; Tiarra Thompson and Morgan Kirkpatrick  from Nestucca High School.  Lisa Phipps facilitated a panel discussion with the girls sharing their future plans and interests in STEM.  Guest Speaker, Margaret Burnett, gave a motivational talk about her journey in a STEM career.  Margaret is a  Distinguished Professor of Computer Science at Oregon State University.  She began her career in industry, where she was the first woman software developer ever hired at Procter & Gamble.  A few degrees and start-ups later, she joined academia, with a research focus on people who are engaged in some form of software development.  She has been recognized as a distinguished scientist and lecturer for ACM (Association of Computer Machinery). 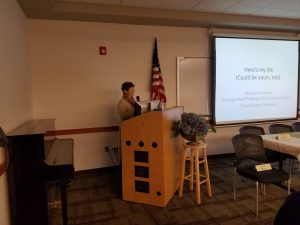 The afternoon luncheon included motivational talks by Amy Tone who spoke about “Pathways to Your Future” and Dr. Emily Henry spoke about the research of women in STEM careers.  Lisa Phipps led the students in a panel discussion about their goals and future plans. Many of them thanked their parents, teachers and families for supporting their passion to learn.